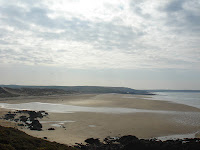 Today was a quick march to Angle where I had to catch the only bus on a Monday in order to get my train home! The day didn't start too well though as I managed to get lost on the Castlemartin estate, I decided to follow a route marked by sign posts but not on the map....big mistake you could of found me that morning quite easily by listening out for a loud voice uttering various expletives in a farmers field!!! Anyhow I managed to find my way back onto the correct route which is basically the road around the Castlemartin Artillery range and on through Castlemartin itself. The route then took me onto the beach at Freshwater West which is where they filmed various Doctor Who and Harry Potter scenes !(see pic) Shortly after Freshwater West I caught up with an interesting young woman who is running 39 marathons in 42 days for charity, which is the whole of the Welsh coast(including Offas Dyke). We had a good chat and I donated to the £25,000 she is trying to raise....here is the link please donate yourself www.dragonrun1027.wordpress.com/....... many thanks. The rest of the walk to Angle took in the sights and sounds of the various Oil refineries at Milford Haven.
Posted by Walk around the British coast at 07:53 No comments: 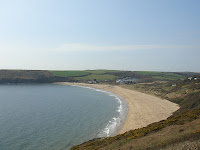 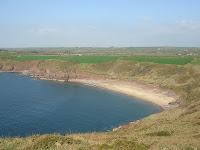 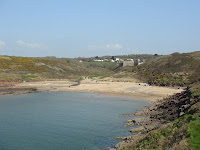 A clear crisp 1st April morning greeted me first thing, and the first order of the day was the 2 mile walk across the beach at Tenby which was lovely!!! Once around the headland I could see exactly where I had to walk to today and that can be a very daunting sight at the start of a days walk!!! The first bay you reach after Tenby is Lydstep Bay which sounds very nice but is in fact a caravan site butted up against a shingle beach....Yuch!!! I then had a small detour around the barracks at Manorbier before dropping down onto the lovely bay at Manorbier Beach (see pic). Next up was Swanlake bay and then Freshwater East (see pics), the fantastic scenery was coming thick and fast and so were the people!!! for 2 days I had hardly seen a soul out walking but today....you couldn't swing a cat without hitting someone!! The terrain was a little bit up and down, but a whole lot easier than yesterday. Finally I made it tho the military ranges at Castlemartin, and to my horror( where despite there being warning signs every 20 yds telling you not to stray from the path due to the possibility of unexploded debris) dog walkers were letting their dogs run freely in and out of the danger areas!!! I was waiting for the "bang" and bits of flying dog :(
Posted by Walk around the British coast at 07:32 No comments: 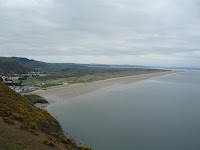 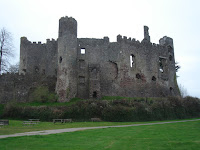 Today started with what I thought was going to be a trudge to Pendine along busy roads, but I was pleasantly surprised when every now and then a Wales Coast Path sign popped up directing me along various farmers fields and saving me from a car squishing! The first port of call was Laugharne with its spectacular castle perched on a hill(see pic), just after this I picked up the "Dylan Thomas Birthday Walk" which was very well sign posted and had a lot of interesting info about this famous Welsh poet. Next stop was Pendine sands which I was reliably informed was the home of the land speed record, I took a pic just to show how big the beach is! And so, the main business of the day was upon me, 10 miles of hills and steps the like of which I haven't seen since deepest Cornwall! though I was relishing the challenge especially after a week of walking through Lincolnshire!! First up was the trek to Amroth this 3.6miles was pretty gruelling as one valley alone had 121 steps to the top!!!! but I was loving it :) :) At Amroth I picked up the Pembrokeshire National Trail and I was surprised by the lack of signage for such an important coastal path, I couldn't quite believe the total lack of interest. Anyhow I strode uphill and down dale through Wisemans Bridge, Saundersfoot, Monkstone Beach and finally on into Tenby. Tenby is another town I haven't visited for may years(12 to be precise!) and once again it was a total let down since my last visit, talk about shabby and full of drunken kids.....where did it all go wrong.................(perhaps a Mr T Blair would like to stand up and be counted for this problem!!!!)
Posted by Walk around the British coast at 06:59 No comments: 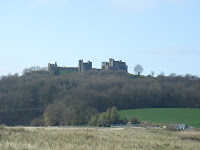 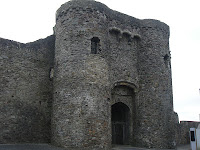 A walk through town took me to the castle at Carmarthen(see Pic), this was followed by a stroll down the high street and on to the river Towy, which I would follow downstream and then pick up the river Taf upstream to St Clears. Today was a mixture of roads and fields plus trying to make sense of the new signs for Wales coast path which were not marked on my slightly old map. Just before Llanstephan I managed to hop onto the beach and was able to walk around the headland, here I took a pic of the castle on the hill. The path then wound around the castle grounds and I had my lunch overlooking the river Towy(very nice indeed!) The rest of the walk was along fields and country lanes, on the outskirts of St Clears I met a couple of council workers who just happened to be in charge of 84 miles of the Wales coast path, we had a good chat and I pointed out a couple of places that signs were missing and they were very gratful for the feedback. It was nice to meet the people behind the hard work that has gone into making this continuous path possible!
Posted by Walk around the British coast at 06:36 No comments: